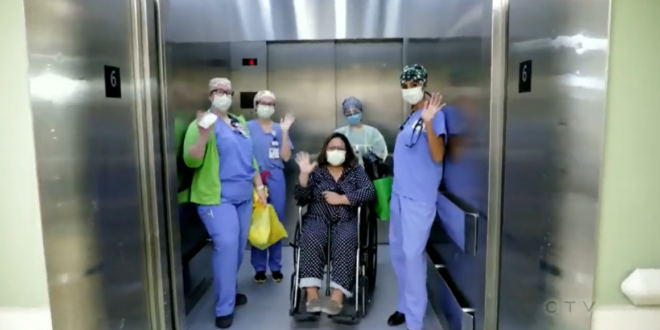 After a grueling battle with COVID-19 that lasted a month in the hospital and a medically induced coma for two weeks on a ventilator, 39-year-old Julie Anne Lingan left Southlake Regional Health Centre in Ontario with applause from health workers as she was wheeled out and a fresh start in what seems to be her second life.

As a mother of four-year-old twins, one of which with autism, Lingan admits to reaching a point where she wondered if she would ever see her family again during the worst of times in the hospital. The ordeal started early March when her husband was diagnosed positive for COVID-19 with the symptoms of a cough, sore throat, and fever. While he was immediately sent home for quarantine, she was not safe from the dry cough and 40-degree fever that overtook her body just as quickly. Despite being a healthy housewife, her initial concern for her husband was paired with her fighting for each breath.

Lingan’s symptoms got worse until she could not even speak because of lack of oxygen, and within 48 hours, the ICU team over at Southlake Regional Health Centre decided that her body could no longer breathe on its own. Lingan describes the experience as more than suffocation because her condition was going rapidly in decline.

A ventilator, even with low survival rate, is the treatment considered by the ICU staff. In preparation for this, Lingan was helped in making a seemingly last video call to her family at home, helpless in this situation. She was put to sleep and intubated. Two longs weeks passed before she was removed from the ventilator and began a slow recovery.

Lingan describes her experience as a “nightmare” and a “tough road,” barely having the right words for it. After a month in admission, she was declared as the first ventilated COVID-19 patient to survive at Southlake Regional Health Centre. At present, her husband has fully recovered and the twins were untouched by COVID-19. They all went to pick her up from the hospital to take her home after a long while.

As of writing, there are now 11,735 cases of COVID-19 in Ontario. The death toll climbs to 698 and 250 people are still in the ICU. Lingan is among the 5,806 people who have recovered from the deadly virus. Ontario has completed 174,170 tests for the virus, 5,546 tests are under evaluation. According to Premier Dough Ford, the province is working on “a framework for gradual, measured and safe reopening of our province” that relies on the data they see on a daily basis. Ontario’s numbers are believed to be on a bit of a “plateau” and officials aim to seem them drop extensively. Physical distancing measures will only begin to ease if the daily case numbers are at least in the 200 range.

Lingan’s story serves as hope for those stricken with COVID-19 and their family members, recovery is possible but prevention is always a better cure.