Miss Universe Canada 2016 and body positive advocate Siera Bearchell announced Monday night through her Instagram account that she is set to return to the Philippines for the local launch of Canada’s most famous coffee and donuts chain, Tim Hortons at this month’s end.

Siera, who lives in Moose Jaw, Saskatchewan, was just in Manila last week after she competed in the 65th Miss Universe competition and finished in the Top 9. Bearchell turned heads and made headlines on the news when she shut down body shamers who think that her figure isn’t ideal for beauty pageants and compared her to others saying she is “larger” than other candidates.

Filipinos admired her confidence and intelligence and are now excited and anticipating her return.

“PHILIPPINES, I’m coming for you!” she wrote on her Instagram post. “I am honoured to be part of the excitement. I cannot wait to see you all!”

“See you in a couple of weeks for some Double Doubles and Sour Cream Glazed Donuts!” – Siera Bearchell 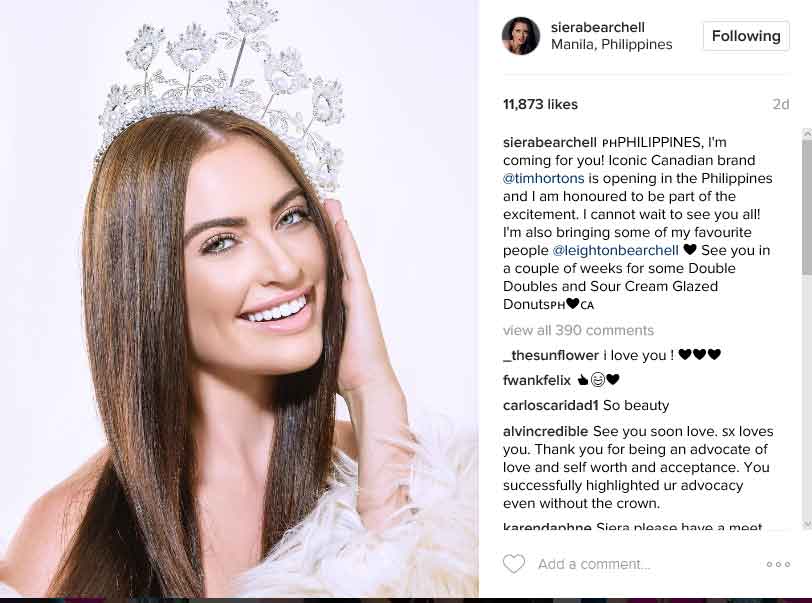 Tim Hortons will open later this month at the Uptown Place Mall in Taguig City.

Meanwhile, Restaurant Brands International (RBI) CFO Josh Kozba said in an interview, “the Philippines is a natural gateway as we look to expand to Asia, as such, we see it as an excellent entry point for the region.”

RBI announced last July that they were planning to open the first Southeast Asian branch of Tim Hortons to the country often saying that the Philippine market is a goldmine for cafe and bake shops adding that there is a ton of potential for long-term earnings if the expansion is done properly. Of course, the company knows that the Asian expansion will be a rough trial and error at first but they are committed to bringing Canadian flavours at the other side of the world.