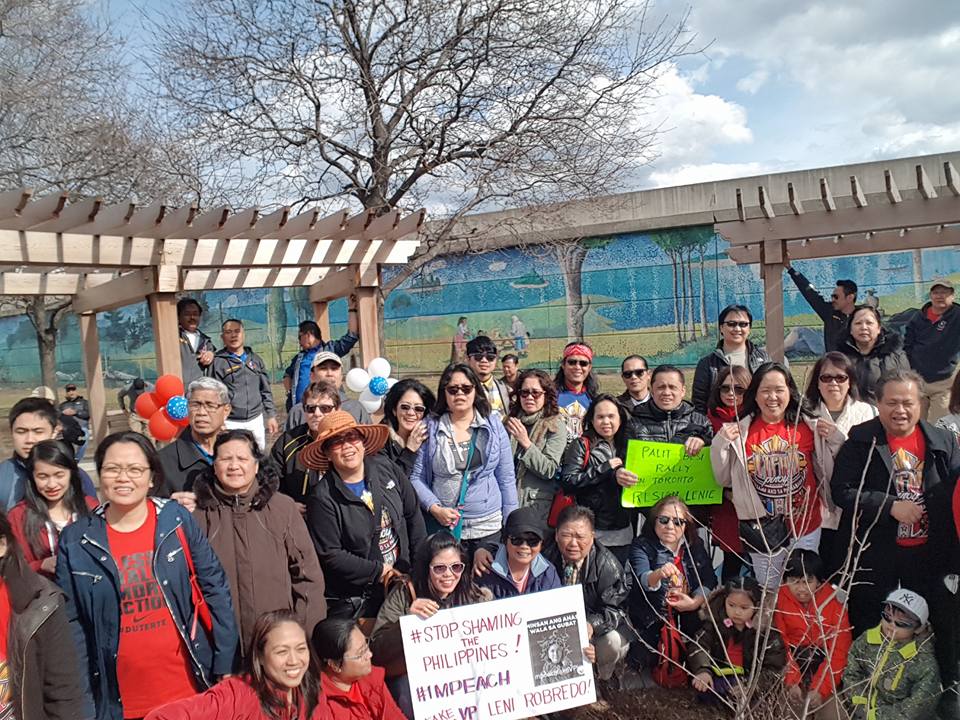 A group of lawyers and bloggers have recently announced that they have been drafting an impeachment complaint against Vice President Leni Robredo. The group pointed out that VP Robredo may have violated the 1987 Constitution and betrayed public trust when she gave distorted figures on the war on drugs in her video. This is the VP’s message to the United Nations about the anti-drug campaign of the Duterte administration. Aside from this, they will also be looking into her Statement of Assets, Liabilities, and Net Worth (SALN).

This announcement has sparked interest and support from Filipinos worldwide especially the President Duterte supporters. In fact, just last weekend, Filipino community groups have staged protest rallies in Toronto, Canada to call for the impeachment of VP Robredo. Our kababayans gathered in Bathurst and Wilson Community Garden and Earl Bales Park with posters and placards.

The groups expressed their willingness to defend and protect the President to carry on with the positive changes in the country. They have felt the urge to act and the sense of responsibility to voice out their support because they believe that they are fighting for the future of the country. Other Canadians also participated in the rally who claim that they are ready to support the projects initiated by Philippine President for the betterment of the Filipino citizens.

The protests are not only held in Canada. Filipinos in New York have also showed their support. Despite President Duterte’s request for the impeachment bids against VP Robredo to be stopped, Pinoys are bringing it to the streets to push for the impeachment. The main rally occurred last Sunday at the Quirino Grandstand in Luneta.

Note that this is already the second impeachment complaint to be drafted against the VP. We will just have to wait and see if and when these complaints push through.

Join our Community. For inquiries, email us [email protected] or contact us on our FB page @Filipino Portal
Previous Pinay Forced into Premature Labour after Unexpected incident, Asking for Help
Next HELP: How to Apply for a US Visa in Canada